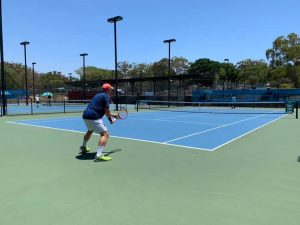 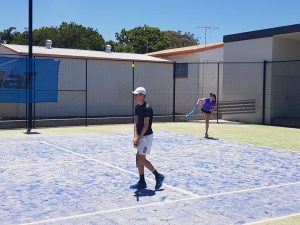 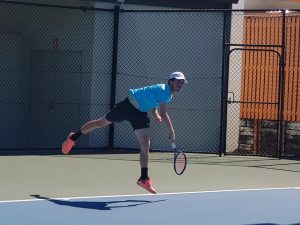 Players have access to a range of junior and adult competitions at Redcliffe Tennis Centre.

Friday Junior Fixtures for Orange and Green Ball players takes place on Fridays during school terms from 4:00 –5:30pm. This fun, friendly and coach supervised competition is for players in our Hot Shots Program who wish to apply all the skills they’ve learned in their weekly lessons in a match environment. They will learn the basics of matchplay including scoring, court positioning and displaying good sportsmanship. Friday Junior Fixtures runs as an eight week program over the course of each school term. The cost is $110 per term (the eight weeks are paid per term in advance).

The Friday Night Junior Moreton Regional Tennis League (MRTL) is a competition for Junior Yellow Ball players who are keen to test their skills against other intermediate and advanced players. The competition began under the direction of Chris Novic and the Focus Tennis Academy staff in July 2017 and has had great success since it’s inception, with over 90 of our juniors having played in this competition as part of their progression in our player development pathway. Players are placed into teams of three players and play a round robin competition over the course of a 16 week season (including finals). A season runs over the course of two school terms. The cost is $140/player per term. Due to the strength and growth of our Junior Program we moved our MRTL from Saturday afternoons to Friday nights (4:15 – 6:15pm) as of 2019. This allows our juniors who are currently playing the MRTL competition the opportunity to also compete  in Super League or JDS Tournaments on the weekends.

Monday Morning Mixed Adult Fixtures is a team doubles competition and runs from 9:00am – 11:30am every Monday morning (usually coinciding with school term dates). Teams of four play a total of six doubles matches per fixture (each player plays three matches). The cost is $12/player per week plus a $10 seasonal registration fee. Two seasons are run per year, with each comprising 16-18 weeks round robin and one or two weeks of finals.

Monday Night Mens Singles Fixtures takes place on Monday nights from 7:00pm – 9:30pm (usually coinciding with school term dates). Players typically play three singles matches per session in a round robin format. The cost is $20/player per week and the fee includes new balls each round and court hire. Two seasons are run per year, with each comprising around 15-18 weeks of round robin competition and three weeks of finals.

PLEASE NOTE THAT ALL FIXTURE PLAYERS ARE REQUIRED TO BE REDCLIFFE TENNIS CENTRE MEMBERS.

PLEASE CONTACT THE CENTRE FOR MORE INFORMATION AS SOME SOCIAL GROUPS MAY NOT BE RUNNING AT ANY TIME DUE TO PLAYERS BEING AWAY, CANCELLATIONS OR OTHER REASONS